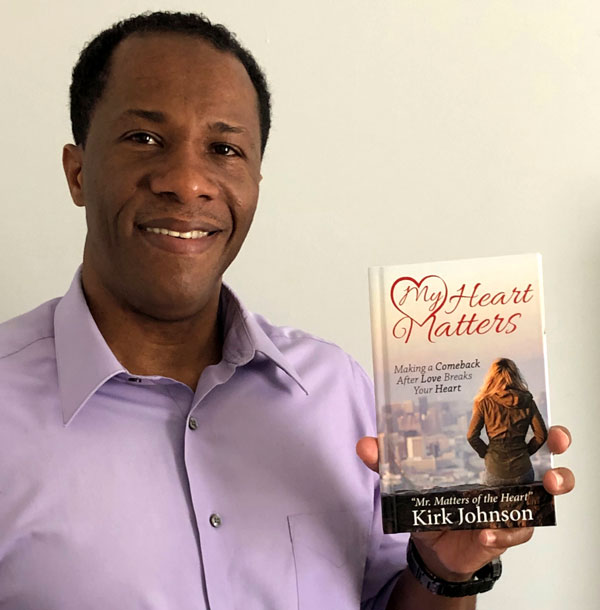 Kirk Johnson with his new book

Atlanta, Georgia… Bahamian talk show host and university academic advisor, Kirk Johnson has released his first book, My Heart Matters: Making a Comeback After Love Breaks Your Heart. The publication debuts just as Johnson, “Mr. Matters of the Heart,” revealed plans to relaunch his popular radio show “Matters of the Heart” in 2019.

Johnson’s talk show was a hit in The Bahamas, where he went live to moderate lively discussions on family, relationships, grief, personal growth, and other human-interest topics. He continues to inspire through his social media platforms as a relationship educator and persistence coach.


Since transitioning to the United States from The Bahamas a few years ago, Johnson served in several academic roles while completing graduate studies, including Interim Manager of Advising for the College of Nursing and Health Sciences Advising Center in Valdosta, Georgia. He also served as a leadership course instructor, and academic advisor and mentor to first-year students. He now resides in Atlanta where his U.S. book tour begins. The inspirational book takes his work in human development to a higher level as it recounts pivotal moments in Johnson’s life including broken relationships, the tragic death of his younger brother, and his life-changing self-discovery.

“I thank God for the opportunity to speak on paper,” said “Mr. Matters.” “My book’s completion is just the beginning of another journey. I’ve learned and grown a lot while drafting it, and now, I’m a published author.”

Johnson said he is excited to host a book signing in The Bahamas because it is where his story begins. He credits his wife Charlene, his parents Chris and Edna and his brothers for their invaluable encouragement and support.

“‘Matters of the Heart’ was born out of a broken heart,” he explained. “When I think about the show and what inspired the book, I think back to how my mom and dad were in my corner when emotionally things were really difficult.” “They instilled principles that influenced my life greatly, even today, Johnson continued. “My folks are really important to me, and I thank God for them and to be able to say, ‘thank you.’”

Johnson revealed he autographed and presented his wife Charlene with the first two copies of his book. The Johnsons met when they were cast to play an engaged couple in ‘One Man’s Struggle,’ a stage play directed by Radel Hanna Parks of Redemptive Productions. By the time they were cast in a second production, ‘The Other Woman,’ he said they were in a committed relationship.

"She’s that person I trust, who always believes in me and my potential and my ability to really and truly impact lives and inspire the world,” said Johnson. “She’s extraordinary, and I love her. I believe in her. We’re building a family and a future but also the ability to positively influence the world.”

Other than his family, Johnson revealed the late Dr. Myles Munroe was another key figure in his life. Munroe served as a pastor, mentor, and friend to Johnson before his tragic plane crash in 2014, which also claimed the life of Parks. “I think about Dr. Munroe, and his legacy still lives,” said Johnson. “He is certainly someone who has inspired and influenced my life greatly.”

The book is currently available in paperback, hardcover, and eBook formats at Amazon, Barnes and Noble, and the Apple Store. An audio version of the book will soon be available and local retailers will also carry print copies. Read excerpts of Johnson’s book on https://myheartmatttersbook.com.
Posted by Derek Catalano at 5:43 AM