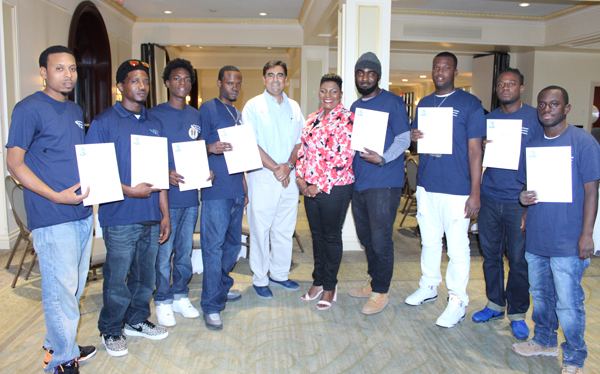 For the second consecutive year, the executives at ARM Caribbean Limited invested in its employees by awarding nine of them the opportunity to complete a specialized training program at the Bahamas Technical and Vocational Institute (BTV).

ARM is a heating ventilation and air conditioning (HVAC) design and contracting firm and is owned by Bahamians. The company is responsible for the completion of the HVAC work at Fusion Superplex.

ARM employee and program participant, Jeiel Munnings, is thankful to the company for believing and investing in him and his colleagues. He said the hands-on skills he obtained from BTVI have made him more efficient in his daily tasks at work.

“The best part of the course was the hands on for me. It's one thing to show it in a book, but when it’s enforced by hands-on training, it can produce a solid foundation,” he said.

Jeiel is excited to continue with ARM and hopes to become an asset to the company. He also has plans to return to BTVI to independently study Electrical II.

Meanwhile, ARM’s Manager Omar Ramirez, said that education is the best way to enhance individual and team capabilities in the company. The company strongly believes in education and training as a means to empower their employees.

“I have noticed that most of the employees from the first cohort of the BTVI program are now working on their own within their crew. This is a great step forward, especially for those that had little experience in construction,” said Mr. Ramirez.

The company plans to continue engaging BTVI to train its employees until most of them complete the training. They then hope to team up with BTVI in other ways that can benefit the wider labor force.

Likewise, BTVI Associate Vice President of Fund Development, Alicia Thompson said BTVI is excited to see the level of interest that ARM continues to show in its employees and commends them for their commitment as they equip them to meet industry needs.

“ARM is indeed a pacesetter and we are certain that the BTVI education obtained has made a valuable contribution to their company. We look forward to many more years of mutually beneficial collaboration,” she said.

The group also successfully completed the 10-hour Occupational Safety and Health Administration (OSHA) certification course. The participants were simultaneously enrolled in a six-week refrigerant management certification course, which culminated in their sitting of the Refrigerant Service Engineers Society Exam (RSES).

The nine employees were also presented with BTVI certificates of completion.
Posted by Anthony Derek Catalano at 11:46 AM