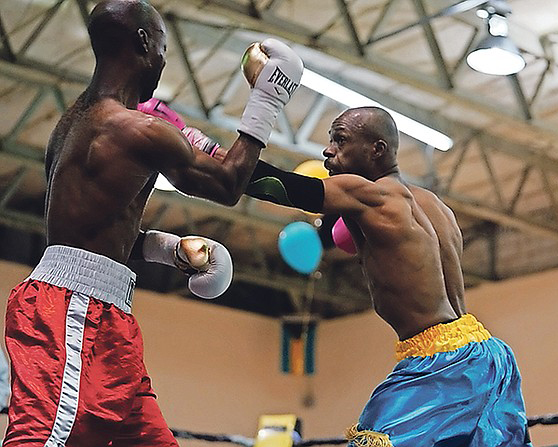 ON THE REPLAY: Meacher ‘Major Pain’ Major in action against Martin Anderson, of Jamaica, in the main event of the 'The Last Dance' at the CI Gibson Gymnasium on Saturday. Photo: Terrel W Carey Sr/Tribune Staff

Meacher Major brought the pain one last time and ended his storied boxing career with a knockout win in what he called a “homecoming” for himself, family, friends and supporters.

Major’s right hook to the body floored Martin Anderson of Jamaica and secured the knockout at the 2:10 mark in the third round in the main event of the “The Last Dance” at the CI Gibson Gymnasium on Saturday.

“In the first round I felt I had some good body shots early, so I thought I just had to take my time, pick the right shots rather than just going out there and trying to go all out and it would come naturally, and it did,” Major said. “I wanted to give him more, that’s why I decided to throw lighter punches in the earlier part of the rounds. He caught me with a few good shots, which I liked because I wanted the fans to see a good performance for the last time, before I hang up the gloves forever.”

Major and Anderson first faced each other in April 2016 at the Caribbean Showdown, hosted at the Kendal Isaacs Gymnasium. In a super featherweight main event, Major secured a second round TKO.