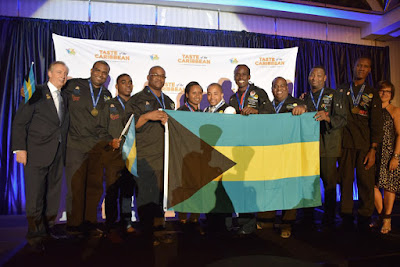 The Taste of the Caribbean is the premier culinary showdown between Caribbean to determine which country has the best Caribbean cuisine.

This is the second consecutive year that The Bahamas has won Junior Chef of the Year.  Hazen Rolle, a student of the University of The Bahamas, took home the title. Additionally, he won a $1,000 scholarship. His dish, dubbed “A Taste of Bahamian Culture,” also won the Most Innovative Dish of the competition.

“I’m just happy to be here and I want to give thanks to God. My team captain Chef Devin Johnson was my backbone in the competition. I gave it my all and I said my prayers,” said Rolle.

“I learned so much just from being here and being on the team.”

Chef Jamal Small was the overall winner for Chef of the Year.

Because of his victory, Chef Small will return to Taste of the Caribbean as a judge for the competition.

“I’m excited because it’s been seven years, since I’ve been fighting for this,” Small said. “Last year, I took a break and this year I said I was coming back for this and I got it. It’s awesome. I always wanted to be a judge. In 2015, I told the team that I was going to come back as a judge and this year I will be doing it.”

While The Bahamas was edged out by Trinidad and Tobago for Overall Team of the Year, Team Captain Owen Bain said he felt that the team performed exceptionally well.

“I’m extremely elated. It’s been a long time coming and we have been training really hard. We have been pushing hard and pushing forward and the medals today show our hard work,” he said.

“We are going back in the kitchen to train more. Some of the things that we know we did we could improve upon and we want to continue to press the envelope to create better cuisine.”

The Bahamas Hotel and Tourism Association (BHTA) is responsible for crafting the team.

President of the BHTA Carlton Russell said the association takes pride in bringing together the culinary ambassadors.

“Culinary Tourism is very important and cultural tourism is on the rise.  I think our chefs are very creative and innovative with local ingredients that we have and we need to bring that to the forefront,” he said.

The Bahamas Ministry of Tourism and Aviation is a major sponsor of The Bahamas National Culinary Team.

“We are very pleased at our performance,” she said.  “It shows that the level of our culinary skills are very high and we are keeping up with our trends. The Bahamas is a team to be reckoned with and we are happy that we did very well overall.”

“We are extending our congratulations to the Bahamas Culinary Team and the BHTA for a job well done at this year’s Taste of the Caribbean. Our National Culinary Team makes us proud each year, as they take their skills to new heights and set the bar for the quality of signature cuisine in The Islands Of The Bahamas,” she said.

Posted by Derek Catalano at 6:57 AM