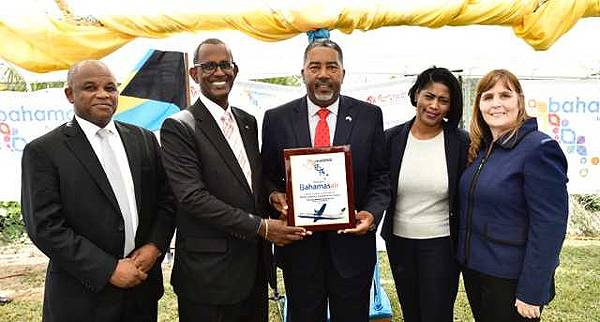 FORT LAUDERDALE, FL  - May 4, 2018 – For many years private pilots and private boaters have been enjoying the advantage of the close proximity of Bimini Island to the U.S. coast line, and now with the recently launched direct service of Bahamasair between Miami and Bimini, everyone can now take advantage of this quick jaunt.

Thursday afternoon saw Bahamasair take a smooth lift off, and ascension to cruising altitude however as soon as the plane leveled off it was time to begin the descent of the 15-minute in-air flight.  Visitors who were travelling to the Island of Bimini for the first time expressed shock and amazement at the short flight and the comments throughout the morning were centered on the obvious - that one could get to Bimini in The Bahamas quicker than between downtown Miami and downtown Fort Lauderdale. 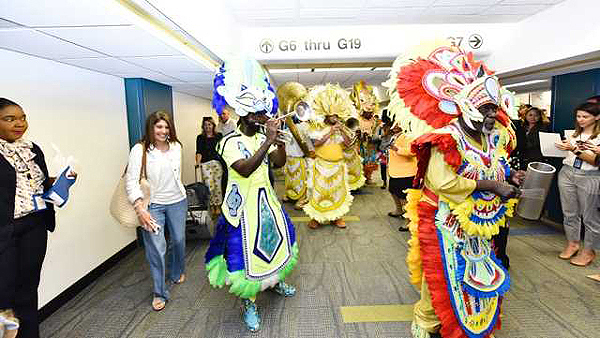 The historic new airline service between the U.S. and The Bahamas is a result of collaboration between the airline and the Hilton Resorts world Bimini and was marked by special inaugural ceremonies at Miami International airport and again at the International Airport, Bimini.  The service to Bimini will provide 4 weekly flights on Bahamasair's ATR 42 - 50 seater.  The flights will leave Miami at 1:30, arrive Bimini at 2 pm and then leave Bimini at 2:30 p.m.  Flights in May will be Sundays, Mondays, Thursdays and Fridays.

Acting as The Bahamas Minister of Tourism, The Honorable, Frankie Campbell, Minister of Transport and Local Government, led a number of speakers making remarks at the ribbon cutting at Miami airport.  Lester Sola, Director of Miami Dade Aviation Department welcomed the new service and expressed that it provides a great opportunity for the many travellers who can now fly to Bimini in The Bahamas from the Miami gateway. The crowded, exciting event also featured Bahamas Junkanoo Performers and refreshments including the famed Bahamian delicacies, conch fritters and cracked conch.

At the airport in Bimini, the beautiful voices of the uniformed, fresh faced school children of Bimini, welcomed the inaugural flight, with a medley of Bahamian Calypsos.  Swaying gently in their blue and white uniforms, the delightful group of singers was a highlight of the short ceremony on Island.  The brief event again included a few speakers and concluded with the exchange of gifts.

Pakeisha Edgecombe, the Honorable Member of Parliament for Bimini (and Grand Bahama), expressed pride at the welcome her young constituents provided for the inaugural flight on Thursday.  The MP also praised Resorts World Bimini, "When you have corporate citizens such as Resorts World taking an active role in ensuring that the area in which they invest succeeds, we are indeed grateful for everything you continue to do for this Island and for your confidence in all that Bimini has to offer."

Of the new service, The Member of Parliament said that it has forged the relationship between Florida and Bimini and that it, "is one that we really appreciate we want it to continue to grow and we know that over the years it will."  She said that the partnership is going to be mutually beneficial for both Florida and Bimini. 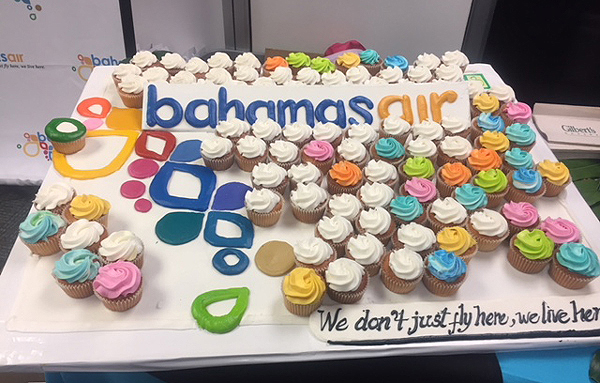 At a mere 50 miles across from the Florida coastline, Bimini is the closest landfall from the United States of America.   The little Island, known as 'The Gateway to The Bahamas' features exciting adventures such as swimming with Dolphins and exploring the 'Lost City of Atlantis'.  The Island is also known as the Big Game Fishing Capital of the World and hosted many famous Americans including the late Clayton Powell, Ernest Hemingway and Rev. Dr. Martin Luther King Jr.