Miami Mayor names day for historic Bahamian woman, and announces scholarship in her honor, at sculpture unveiling at local University. 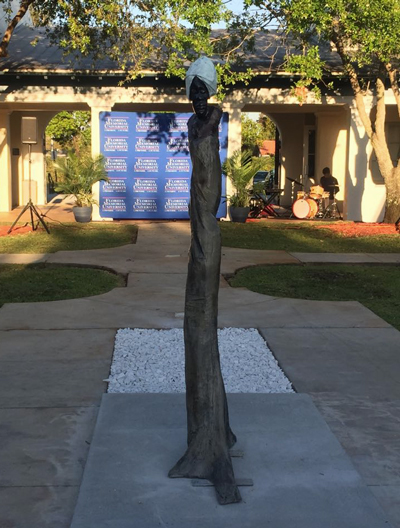 FORT LAUDERDALE, FL  - March 20, 2018 - A sculpture created by acclaimed Bahamian artist, Antonius Roberts, and representing a female Bahamian immigrant to the U.S., Mariah Brown - one of the fist black homeowners in Coconut Grove, Miami, Florida - was recently unveiled on the campus of Florida Memorial University.

The historical sculpture unveiled, represents what has been described as "one of several beautiful dancing women born out of the artist's deep-seated respect for the sanctity and significance of trees and forests."  The mounted sculpture will be edition number one of twelve pieces in memory of Bahamian immigrant Mariah Brown, who was one of the first black homeowners in Coconut Grove and other women who have positively helped and shaped the community of South Florida.

At the historic unveiling, Mr. James Jackson, representing the Mayor of the City of Miami, Francis Suarez and Commission Vice Chair, Ken Russell, read a proclamation from the city, naming, Friday, March 16th as Mariah Brown Day in the City of Miami.  Additionally on behalf of the Mayor and Vice Chair Russell, Mr. Jackson presented a scholarship in the amount of $5,000.00 that will go to a deserving female student of Florida Memorial University. 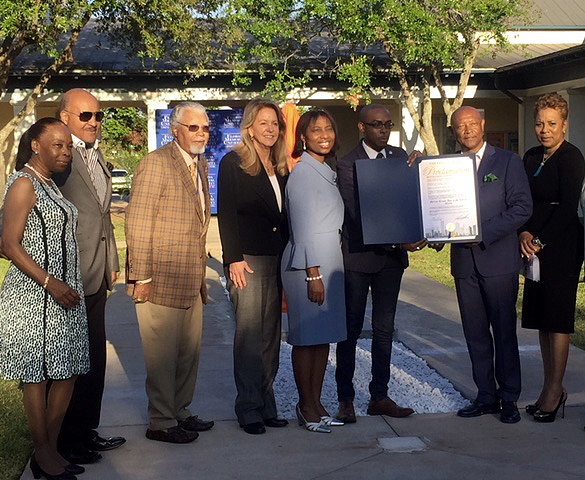 The naming of a day as well as a scholarship in honor of Ms. Brown was a tribute to celebrate her many accomplishments and according to the proclamation read, to note her accomplishments to the culture, identity and spirit of the South Florida community.

The Proclamation made it known that Mariah Brown became the first black Bahamian resident of Coconut Grove in the 1880's, pioneering the establishment of Miami's earliest Black community.  Also that originally from the Bahaman Island of Eleuthera, Ms. Brown was hired to work in the village’s first hotel, the Peacock Inn and subsequently built one of the first homes in the neighborhood known as the "Village of Coconut Grove West" . Also, that by encouraging friends and family to join her n building a new community she welcomed them all to her home on historic Charles Avenue, which she built by saving money from her duties as a washerwoman.  The Proclamation further noted that, it was Brown's pioneering spirit that inspired the creation of churches, a school, a library and a Bahamian-style village that predates the City of Miami itself.

The unveiling ceremony was well attended, and those in the audience included South Florida government officials; Bahamas representatives from its local Consul General Office, Tourist Office and Bahamasair and members of Florida Memorial College Board of Trustees.  Along with his wife, the artist, Mr. Roberts was in attendance to perform the unveiling and noticeably in attendance was a group of Bahamian students currently enrolled at the university.

Giving brief remarks, The Honorable Consul General to The Bahamas, Florida, Mrs. Linda Mackey, noted that Ms. Mariah Brown left a legacy of strength, endurance and passion, and called on the students of the University in attendance at the event, "especially the female students," to let the memory of Ms. Brown be a positive source of motivation.

Bahamian Vena Symonette-Johnson an assistant professor at Florida Memorial University, as well as a former student of the institution, shared with audience at the unveiling about the Casuarina trees that the artist used to make the sculptures that form Sacred Spaces, Clifton Pier, Nassau, Bahamas. She said that the artists had sculpted the pieces while the trees were still rooted in the ground and that instead of destroying them in the name of progress they are being conserved as a heritage.

Speaking poetically about the sculpture representing Ms. Brown, the Assistant Professor said, "Sacred Woman Mariah was already lying on the shores waiting for you Antonius, to discover her, uncover her.  Waiting for you to free her from obscurity to her new home of destiny.'

Ms. Symonette-Johnson also stated that, "We here at Florida Memorial University, appreciate the fact that she traversed the ocean wide, and we welcome Mariah Brown.  Indeed, we are honored to have her here at her new home.  May her legacy live on."
Posted by Anthony Derek Catalano at 5:04 AM