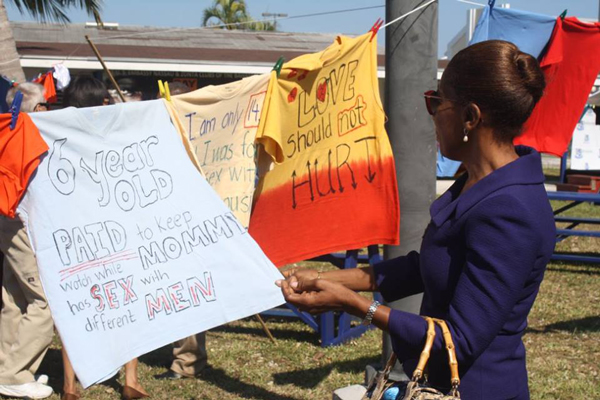 Wife of the Prime Minister, Patricia Minnis, views one of the poignant messages written on a shirt strung on a clothesline for the local version of the internationally recognized Clothesline Project.  Photos by Shantique Longley

“Tell your friends stop. Tell your fathers. Do not follow in those footsteps,” urged Ms. Minnis, while opening the internationally recognized Clothesline Project held at The Bahamas Technical and Vocational Institute (BTVI).

Ms. Minnis expressed how pleased she was that young men were in the audience during the ceremony at BTVI’s Old Trail Road campus.

“Until we include our men in helping to (eradicate) this problem, the work becomes more difficult…this event recognizes the need to educate and empower, and I salute BTVI as an event like this is especially helpful in a school setting as young (women) might be experiencing the chaos and young women are vulnerable,” said Ms. Minnis.

The process of writing messages and drawing on the shirts which were strung on clotheslines, is said to be therapeutic. It helps in the healing process of victims, while assisting others to understand the horrors involved in violence against women. Participants vocalized their experiences, with many of the shirts containing motivational messages, while others were poignant such as “Love does not hurt”, “I was in the tub when poppy touched me”, “You may think he took everything but you still have a voice” and Ms. Minnis’ very own shirt reading, “Let’s hear your voice. Speak up.” 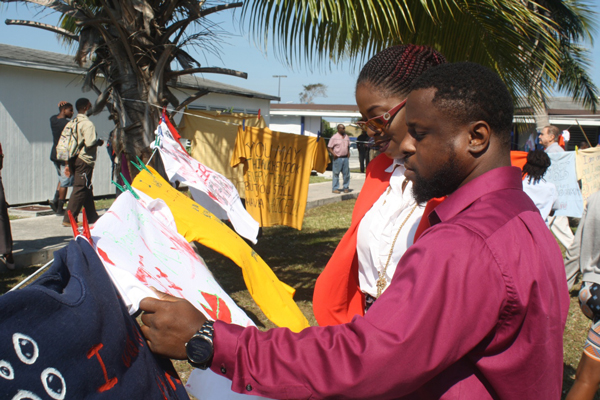 The shirts’ distinct colors also brought powerful meaning with a multitude of colours including, but not limited to pink, which represents rape and sexual assault, blue shirts representing childhood survivors of sexual abuse and the white ones in memory of women who died as a result of domestic violence.

The World Health Organization (WHO) estimates that 1 in 4 adults has been subjected to violence in childhood. Meanwhile 1 in 5 girls and 1 in 13 boys report being sexually abused in childhood. Also, Caribbean countries number among the top 20 in the world in terms of violence, with Trinidad and Tobago, Jamaica and The Bahamas listed prominently.

Additionally, Pan American Health Organization (PAHO) and WHO Representative, Dr. Esther de Gourville, noted that there are some distorted views regarding gender based violence, suggesting an urgent need to increase awareness and education locally. 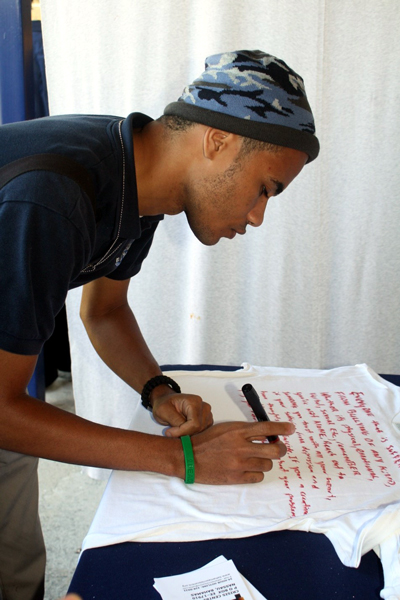 A BTVI student writes a lengthy message of encouragement in support of the fight against domestic violence.

Some of the health impacts of gender based violence include physical and psychological injury to victims, unplanned pregnancies, sexually transmitted diseases, behavior changes and mental health problems, in addition to  stress related and eating disorders that manifest in the form of non-communicable diseases and inter-generational violence when gender based violence occurs within the home.

Following the ceremony, a gong, bell and whistle were heard at various points. It was an auditory reminder of the violence against women. The gong signaled the reality that a woman is battered every 10 seconds, a whistle indicated the rape of a woman every one to two minutes and the bell rang every 15 minutes, symbolizing that a woman has been murdered.

“Activities like the Clothesline Project are important for creating safe and innovative spaces for dialogue…we all have a role to play in speaking up against gender based violence until it is no longer socially and culturally accepted,” she stated. 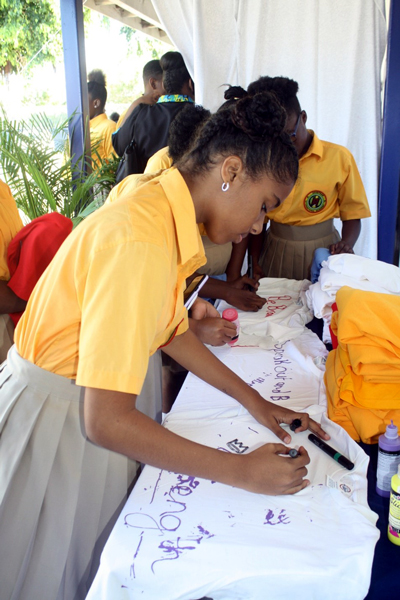 Students from Akhepran International Academy designing shirts to encourage those who have experienced domestic abuse. 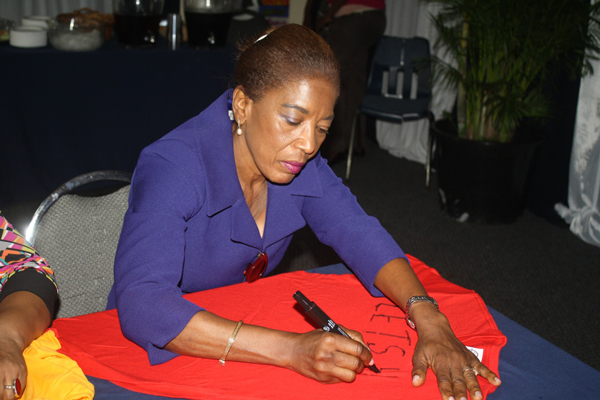 Wife of the Prime Minister, Patricia Minnis, writes a message to victims of domestic violence: “Let’s hear your voice! Speak Up.”

Posted by Derek Catalano at 5:21 AM