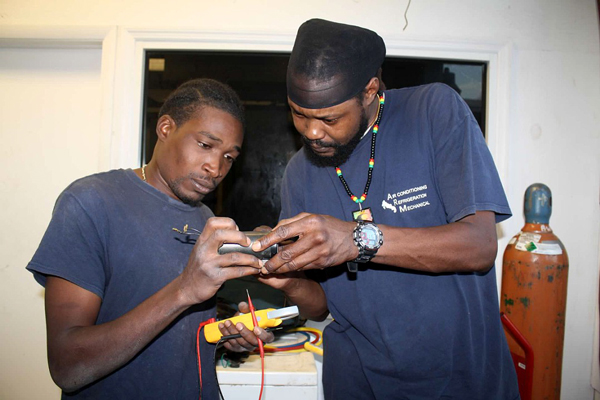 Seven employees of ARM Caribbean Limited have successfully completed four modules of professional training at the Bahamas Technical and Vocational Institute (BTVI), thanks to the generosity of their employer.

ARM is a Heating Ventilation and Air Conditioning (HVAC) design and contracting firm that has existed over the past six years and is owned by Bahamians.

Skillman, James Dorsette, expressed gratitude for what the company has done.

“You have companies who don’t invest in their workers, so I am grateful they presented the opportunities,” said Mr. Dorsette.

“In my position, I mainly dealt with duct work, sheet metal and fiber glass. Now, I have learned electrical work, which I never knew before. I also now know sub-cooling, super heat and brazing, which is a form of welding and how to evacuate the AC system,” he added.

Semi skillman, Lamond Gilbert, who has been with the company nearly five years, also touted his new skills, while thanking ARM for having the vision to invest in its employees.

“This is a great company; they’re not selfish. I didn’t know about electrical, but now I know.  It was challenging, but good. In fact, the electrical class helped with HVAC,” said Mr. Gilbert. 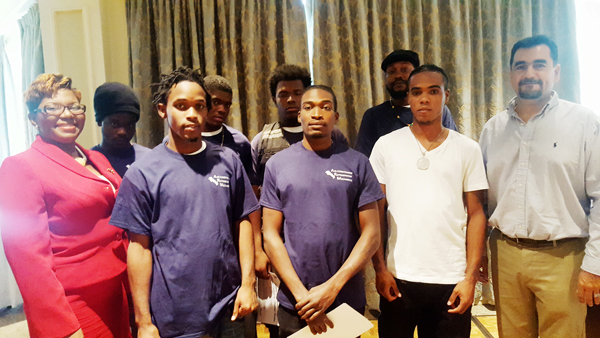 The group also successfully completed their 10 hour Occupational Safety and Health Administration (OSHA) certification. They were simultaneously enrolled in a six-week Refrigerant Management certification course, which culminated in their sitting of the Refrigerant Service Engineers Society Exam (RSES). They are awaiting results of the latter.

Additionally, during the recent end-of-year staff party held at The Hilton, the seven employees were publicly acknowledged for their hard work and presented with their BTVI certificates of completion. ARM’s Manager, Omar Ramirez, said the company strives towards the success of each individual associate. He noted that the partnership with BTVI was to elevate the training and capabilities of associates.

“Successful stories like these are what characterize our company, as we make the effort to maintain quality of work,” said Mr. Ramirez.

Mr. Ramirez noted that the company has been training associates for its six-year history, but at the in-house level.

“I’ve been living in The Bahamas for 20 years and I love this country. Our partners and I want to make sure we contribute to the economy and it starts with education,” said Mr. Ramirez.

Mr. Ramirez said his team took the professional development initiative so seriously that they ensured there was nothing hindering the men from successful completion.

“We constantly communicated with them.  We paid, not only for tuition, fees, books and supplies, but for their transportation to get from work to BTVI, just to ensure that was not a burden. All they had to do was show up,” he emphasized. 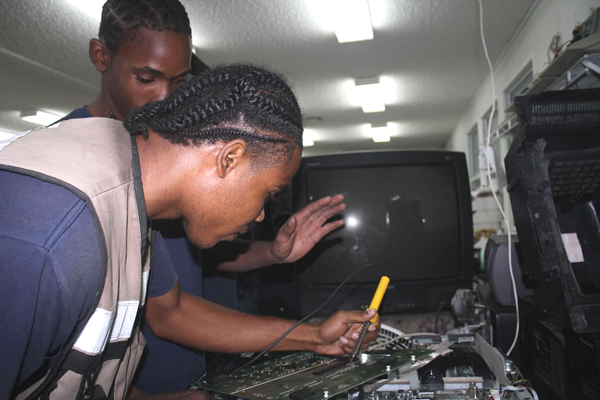 ARM Caribbean employee Lamond Gilbert is shown here busy in an Electronics class, as his classmate and colleague Kirkwood Forbes looks on.

“We commend you for taking on the challenge to ensure that your employees are adequately equipped to face the challenges of an ever evolving workplace,” said Ms. Thompson.

BTVI President, Dr. Robert W. Robertson added how impressed he was that ARM approached BTVI for the specialized employee training. He said it speaks to the company’s understanding of how training and workplace productivity connect.

“What ARM has done is impactful to the individual employees, but also to the overall organizational development and success. Hopefully other companies would see the value in such training,” said Dr. Robertson.

As of January 2018, ARM will be sending an additional 12 employees for training at BTVI.
Posted by Anthony Derek Catalano at 9:41 AM