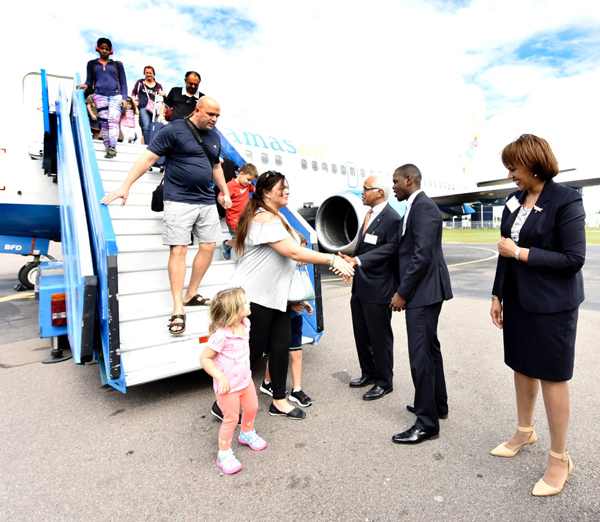 Bahamasair's Boeing 737-500 landed in The Bahamas with 115 passengers and was welcomed by the Minister and other Tourism dignitaries and airport officials.  The flight was greeted by the festive, traditional sights and sounds of Bahamian Junkanoo and a brief ceremony was followed by a reception that offered guests, including the international media, with a taste of the Bahamas including - Sky Juice (gin and coconut water) and Bahamian conch salad.

With its new international service, Bahamasair has tapped into a market that now allows the national flag carrier the ability to bring travelers directly from the Southwest United States to The Bahamas via the busy Houston hub.

The bi-weekly service will leave Nassau at 4pm on Wednesdays and Sundays and leave Houston at 8am on Thursdays and Mondays, giving visitors enough time to make connecting flights to any of the beautiful Islands of The Bahamas.

The inaugural flight received a grand send off from IAH on Thursday morning, where dignitaries from The Bahamas and Houston gathered for a ribbon cutting ceremony.

IAH General Manager, Ted Kitchens was one of the speakers at the ribbon cutting in Houston and said  “Bush Intercontinental airport is the only airport in North America to have non-stop service to all six continents on the globe. Here at Bush airport, passengers have a packed menu of both domestic and international destinations to choose from. Bahamasair is a fantastic addition to the roster of quality airlines providing service to those great leisure destinations,”

Also in attendance at the Houston early morning ceremony, Bahamasair Chairman, Orville “Tommy” Turnquest pledged that the airline will provide great service and an excellent customer experience.
“As we launch this route, we trust that the travelling public will consider Bahamasair as their first choice when travelling to and from The Bahamas from Houston. We are satisfied that we are ready to meet the challenge to grow this route exponentially,” he said.

Posted by Anthony Derek Catalano at 7:08 AM