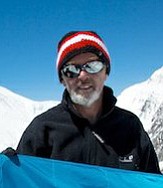 A Bahamas-resident billionaire adventurer has triumphed in the first round of a dispute that aborted take-off of his $150 million trip to the Moon.

A US judge last week Tuesday upheld the fraud and breach of contract claims brought by Paradise Island-based Harald McPike against the space tourism firm he claims has stalled his bid to reach ‘the Final Frontier’.

District judge T. S. Ellis, sitting in the east Virginia district court, ruled on November 21 that Mr McPike’s more serious allegations should survive Space Adventures’ efforts to dismiss them on legal technicalities and instead proceed to a full trial.

Legal documents obtained by Tribune Business reveal that Mr McPike is seeking the return of the $7 million “first installment” paid to Space Adventures on the grounds of fraud and misrepresentation.  Read more >>
Posted by Anthony Derek Catalano at 4:14 AM