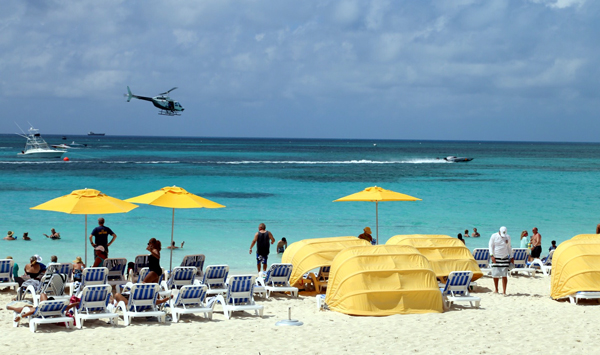 BIMINI, Bahamas: The spotlight was on Bimini April 28 – 29 for  the first annual Offshore Powerboat Competition. It was a beautiful weekend that saw 16 fast powerboats gracefully glide across the deep blue Bimini seas.

The thrilling event which brought thousands of participants, families and fans to Bimini was a partnership between Resorts World Bimini, The Bahamas Ministry of Tourism (BMOT) and The Bahamas Ocean Sports Authority (BOSA). In conjunction with the Offshore Powerboat Association (OPA). The competition is also scheduled to appear on NBC Sports Network TV on the East Coast, the Midwest and on the West Coast.

The competition was set on the legendary Resorts World Bimini property and 16 powerboats travelled from across the world to contend in a competition that was held outside of the United States, for the first time.

As fans gathered to watch the race from the best seat in the house, the Beach Club restaurant, competitors were preparing for an unpredictable race.

Prior to the race, Karl Steger, a driver for 2nd Amendment Powerboat team said when competing in a new place, expectations are often jumbled.

Steger like all the competitors planned to win but if he didn’t win would revel in the fact that he was in Bimini.

“The hotel is beautiful, the marina is beautiful, the waters are beautiful and at the end of the day, if we lose, we’re still here in Bimini. I brought my wife of two years and my son that is two years old and my sister to watch him and my mother in law to watch her down here to enjoy the entire experience. We extended our trip for another two days beyond our work experience to just Chris Barrett and David Defederico of Liquid Courage and Class 6 Winners expressed their gratitude that the race was held in The Bahamas.

“The weather separates The Bahamas from other places we’ve competed in. This place is paradise, my boat this morning wouldn’t go into forward gear as we left the dock and I thought to myself I’m not going to be able to race but then I said to myself, ‘It’s okay I’m in The Bahamas,” Barrett said.

His partner, David said the water was indeed a winning factor for the competition but it was the love they received he enjoyed more.

“The water was a big factor but most of all the people on this island, they just embraced us and said ‘Thank you, we want more,’” David said.

Johnny and Jason Saris of Saris Racing and the winners of Class 4 echoed the sentiments of their competitors.

“The Bahamas is prettier to compete in than anywhere else. With the backdrop of Bimini and Resorts World, it literally can’t get any better than that. But once the green flag goes up, it’s the same. It was a really interesting race course they had set up. But when you stop and you look around and you look at the beach, you look at the beautiful resort, the atmosphere and you think, wow I get to be in Bimini after this instead of I get to be wherever else that helps,” Johnny said.

Jason agreed that the race remains the same but Bimini is special.

“The race is the race, the ocean is the ocean although the water is much prettier down here, other than that the waves are the same. But after the race is over, the hospitality here is over the top, everybody has been so welcoming, so nice to us and it’s been an absolute pleasure to be here,” he said.

“The biggest benefit to it is being involved with a company as big as Resorts World, in any motorsport or type of sport. Sponsorship is huge and when you get a name like that attached to what we’re doing it helps us in all our other sites, in promotion and sponsorships,” he said.

The other side of it is to have an international race site where we’re actually out of our own country and bringing everything here is a big bonus for us. It’s beautiful, yesterday we had our boat in the water, we were just running some practice laps and we just stopped down at the end of the race course, got out of our boat and we were just lying on the deck, it was so beautiful.” 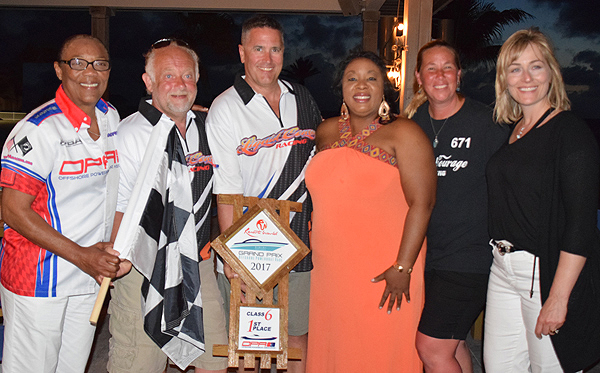