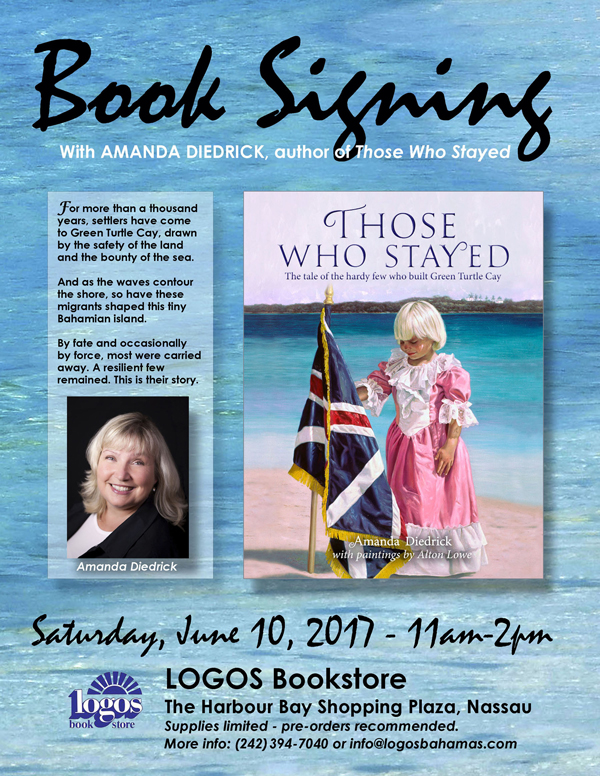 Diedrick, a descendant of Hope Town founder Wyannie Malone, as well as rumoured pirate Matthew Lowe, is the author of a newly released coffee table book, Those Who Stayed – The Tale of the Hardy Few Who Built Green Turtle Cay.

Those Who Stayed tells of the Lucayans, Eleutheran Adventurers, Loyalists and others who, over centuries, sought safety and refuge on Green Turtle and the surrounding cays. The full-colour, 185-page book includes 200 historic images of Green Turtle Cay, two dozen oil paintings by world-renowned Bahamian artist and historian, Alton Lowe, and several never-before-published, first-hand accounts of 20th century Abaco life.

“So much of Green Turtle Cay’s past isn’t immediately obvious,” says Diedrick. “You’d never know, for example, that there was once a large Lucayan village near Bita Bay, on the island’s east coast. Or that pirates like Calico Jack Rackham, Anne Bonny and Mary Read hid out in Black and White Sounds. Or that in the late 1800s, the cay’s population was four times what it is now and New Plymouth’s streets were lined with large, elegant homes. There was a dance hall, a theater and even an orchestra. It’s difficult to reconcile all of this with the quaint, low-key town we know today.”

Since its Green Turtle Cay launch in January, Those Who Stayed has proven popular, and not just with Bahamians. “It’s amazing how many orders we’ve received from the United States, Canada and even Europe,” says Diedrick. “Some folks have roots in Abaco. Others just love the Bahamas and want to learn more about our history.”

“I’m especially touched by the people who buy copies for their children and grandchildren,” she says, “because that was my vision from the start – a book that would be handed down through families. Our ancestors were incredibly brave and resilient. It’s important that we preserve their stories and share them with younger generations.”

Ricardo Munro, owner of Logos Bookstore, agrees. “This book is a must-have for everyone who truly wants to understand Bahamian history and where we come from,” he says.

Due to anticipated demand, customers are encouraged to pre-order their copies of Those Who Stayed prior to the June 10th event. Logos Bookstore is now accepting pre-orders, and books may be collected at or following the book signing.

To learn more about the signing event or to pre-order Those Who Stayed, contact Logos Bookstore at (242) 394-7040. For more information about the book or author, visit www.thosewhostayed.com.

Amanda Diedrick is the author of Those Who Stayed: The Tale of the Hardy Few Who Built Green Turtle Cay.

A writer for more than two decades, her articles and photographs have appeared in Abaco Life, the Abaconian and the Nassau Tribune.

On her blog, LittleHousebytheFerry.com, Amanda writes about Abaco history and documents the restoration of Fish Hooks Cottage, her ancestral home in Green Turtle Cay, Bahamas, a project she and her husband, Canadian journalist Tom Walters, began in 2014.

A ninth-generation Bahamian who  counts Loyalist Wyannie Malone and pirate Matthew Lowe among her ancestors, Amanda has a background in public relations and corporate communications.

She enjoys researching her tangled Bahamian and Jamaican roots, collecting historic books and papers about the Bahamas, and volunteering with Green Turtle Cay’s Albert Lowe Museum. Her goals include visiting and photographing every inhabited Bahamian island and perfecting her guava duff recipe.

When not at Fish Hooks, Amanda, Tom and their dog Wrigley live in Los Angeles.
Posted by Derek Catalano at 4:07 AM