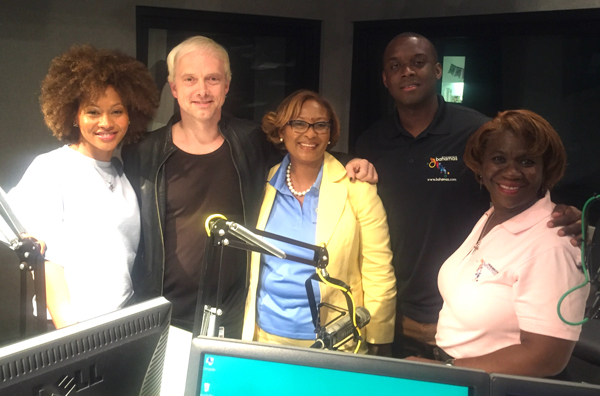 FORT LAUDERDALE, FL  - April 17, 2017 - A marketing team from The Bahamas Ministry of Tourism recently used the opportunity in Los Angeles to visit the CBS studio there to  record all that is exciting and new in The Bahamas, to be shared with consumers in that market. The recorded interviews were with special emphasis on new resorts in The Bahamas, as well as cultural and heritage festivals  and signature sporting events in The Islands.

The interviews are being used as  commercials and are airing on AMP Radio 97 in Los Angeles, CA, through June of this year.

CBS' Andrew Harlander  hosted the team of Bahamas Ministry of Tourism Marketing Managers.  The young executives hailed from BMOT  offices across the U.S. and were in Southern California providing updates to Travel Agents at Special Trade Show/Dinner Presentations and Cultural Extravaganzas in Los Angeles and San Diego.

CBS RADIO is one of the largest major-market radio operators in the United States, with stations covering news, sports, talk, and a broad range of music genres. CBS RADIO reaches more than 72 million consumers nationwide each week. As a part of CBS Corporation, the division owns and operates 117 radio stations in 26 markets – including the top 10 as ranked by Nielsen Audio.

For additional information on all of the excitement and adventure, taking place in The Islands Of The Bahamas, visit www.bhamas.com or Tourismtoday.com or call 1 800- 4Bahamas.
Posted by Derek Catalano at 7:37 AM