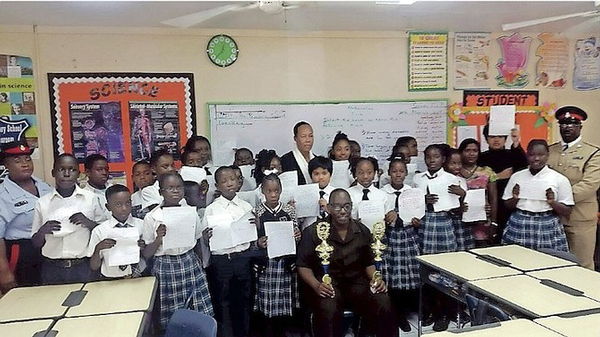 MORE than a dozen compassionate sixth grade students at Centreville Primary School gave handwritten poems and prayers to the Royal Bahamas Police Force (RBPF) yesterday for the families of the two teenage boys who were brutally murdered ten days ago.

Senior Pastor of Church of God of Prophecy and Former Assistant Commissioner of Police Hulan Hanna, who is also a member of Fathers Assisting Children and Teachers (FACT), said the idea for the students to write their feelings down came to him after he learned of the deaths of 13-year-old Keishon Williams and 15-year-old Davante Lindsey.

The bodies of the boys, who are cousins, were discovered shot to death on a dirt road off Graham Drive, Yellow Elder Garden on March 19.  Read more >>
Posted by Derek Catalano at 4:04 PM