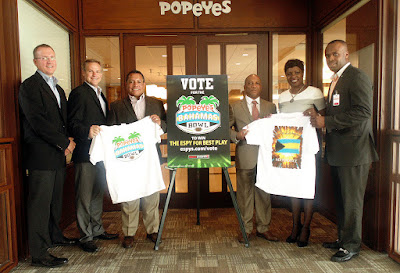 (Atlanta, Georgia)… Bahamians in Georgia are going to “love that chicken from Popeyes” when they gather to celebrate the nation’s 42nd independence in Atlanta, Georgia on July 11th, 2015. The popular fast food franchise confirmed on Wednesday, that they will be celebrating with The Bahamas at the annual Family Fun Day Picnic, hosted by The Bahamas Consul General’s Office of Atlanta.


“The Bahamas 42 independence is something that we are delighted to be a part of so we will be celebrating with friends from The Bahamas,” beamed Tim Waddell, Vice President of International Relations.

“When we first met Consul General Randy Rolle, we were very excited we had an opportunity to partner together,” Waddell went on to say. “And through is office and his leadership, this partnership between Popeye’s and The Bahamas is growing at a level that we didn’t think was possible. We are thrilled with his leadership and the opportunity to not only call him a friend but also a partner, as we plan to expand Popeye’s throughout The Bahamas.”

“We are absolutely thrilled to be in partnership with The Bahamas,” he added. “At Popeye’s, we get excited anytime we launch in a new market but the idea of working with The Bahamian people, both here in Atlanta and throughout Nassau, and Freeport and elsewhere, is a huge opportunity for us to show the love and support that we have for The Bahamas. We signed an exclusive development agreement with a local partner in The Bahamas and plan to be opening our first restaurant in Nassau, by the end of the year.”

He said they are also excited about the Bahamas/Popeye’s Bowl which is taking place again this Christmas Eve.

Eddie Archer, General Manager for the Bahamas Ministry of Tourism’s Atlanta office said that they are excited to be a part of the Bahamas Popeyes Bowl.

“Last year, it was very, very successful and this year we’ve already got ESPN on board and Popeye’s has now signed on for at least another two or three years of doing the Bowl in The Bahamas,” Archer revealed. “And just minutes ago, we understand the last play in that game last year, has made it to the finals of the ESPY awards this year. So we are really looking forward to a most exciting 2015 Bowl.”

Deputy Consul Monique Vanderpool expressed her excitement about the upcoming ventures saying, “When you look at where Popeyes originated in Louisiana and the Islands of The Bahamas, there’s a synergy in terms of the culture, the food… so I think it’s a wonderful partnership.”

She also spoke about the various activities taking place in Atlanta to coincide with The Bahamas independence celebrations. She noted that on Friday night at 6pm, there will be an Independence Toast to The Nation Cocktail reception at the Consul General’s residence, followed on Saturday by the Popeye’s sponsored Family Fun Day at 630 Woodrow Road, Lithonia. The Fun Day will feature Bahamian dishes, activities and even performances from Bahamian artist Veronica Bishop. The celebration concludes on Sunday, following a church service at St Paul’s Episcopal Church, 294 Peyton Road, Atlanta.


“Our main goal here is to represent the interest of Bahamians of course the country,” said Rolle. “We are proud members of the team that looks at every opportunity we have to represent our country and so just bringing closer relationships with each other is definitely exciting for us. We look to continue to form relationships that will benefit the nation as a whole.”

Posted by Derek Catalano at 2:36 PM