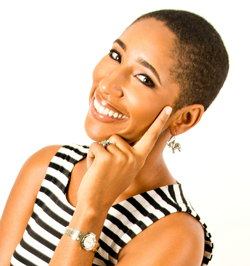 Her Majesty The Queen will present the inaugural Queen’s Young Leaders Awards to a young person from the Bahamas at a ceremony at Buckingham Palace on Monday 22nd June.

Alicia Wallace is among 60 exceptional young people from across the Commonwealth who have been recognised by The Queen for taking the lead in transforming the lives of others and make a lasting difference in their communities. The 29-year-old from Nassau has been selected in recognition of her work as director of Hollaback! Bahamas, which works to end street harassment, and also as co-founder of the Coalition to End Gender-based Violence and Discrimination.

Before receiving their Award at Buckingham Palace the winners will meet the UK Prime Minister, David Cameron at 10 Downing Street, visit the headquarters of global social networking company, Twitter and meet with senior executives at the BBC World Service.

Alicia Wallace said: “I am so happy to be one of the first recipients of the Queen’s Young Leaders Award. To be recognised for my work and be presented with an Award by Her Majesty The Queen at Buckingham Palace is such a huge honour. I can’t wait to meet all the other Award winners in London and get involved in all the exciting activities that are taking place throughout the week.”

This year’s Award winners are aged between 18 and 29 and are working to support others, raise awareness and inspire change on a variety of different issues including; education, climate change, gender equality, mental health and disability equality.

Following the ceremony on the 22nd June, Award winners will spend four days in the UK to take part in a residential development programme as part of the Award prize. The programme includes workshops at Cambridge University, meetings with UK businesses leaders, and visits to life changing social action projects.
To see a full list of Award winners and Highly Commended runners up, and read more about their stories please visit www.queensyoungleaders.com.

If you or someone you know is doing inspiring work like this year’s Queen's Young Leaders, from 7pm on Monday 22nd June you can apply or nominate someone for a 2016 Award at www.queensyoungleaders.com.
Posted by Anthony Derek Catalano at 5:23 AM