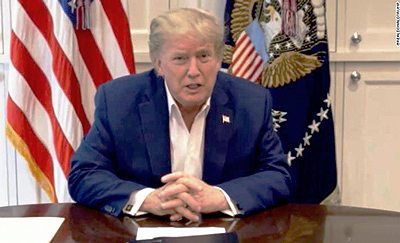 (CNN) - Some seven months into a pandemic that has killed more than 209,000 Americans, the nation is now facing a grave governing crisis with its commander in chief hospitalized -- his condition hinging on his progress over the coming days -- as the White House events of the past week serve as a textbook example of how not to handle a deadly virus.

Late Saturday night, the public learned new details about why President Donald Trump was airlifted to the hospital Friday, when chief of staff Mark Meadows said during an interview with Fox News that Trump had a fever on Friday morning and his oxygen level had "dropped rapidly." Meadows added that Trump has made "unbelievable improvements from yesterday morning."

A memo from Trump's physician earlier Saturday night said that Trump had "made substantial progress" since his diagnosis but "is not yet out of the woods."  Read more >>

Posted by Anthony Derek Catalano at 7:28 AM