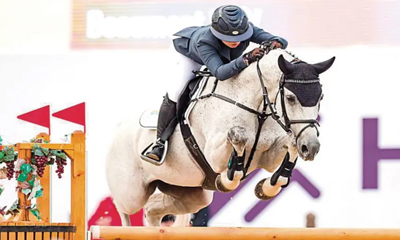 It was a historic weekend in the sport of equestrian for The Bahamas as rider Anna Camille Vlasov picked up three victories at the Jumping du Golfe de St. Tropez HUBSIDE event in St. Tropez, Grimaud, France. It is one of the most prestigious equestrian riding events in France, and Vlasov was victorious at the Grand Prix CSI 1* level.

“To hear the national anthem was very emotional at first but then every time I hear it now I just get filled with joy and excitement. What an honor it is to be the first and it really shows that hard work pays off. I’ve been working very hard to achieve this goal for the last four years,” Vlasov said.  Read more >>
Posted by Anthony Derek Catalano at 9:43 AM