Researchers are starting to home in on the ways in which the use of e-cigarettes raises the chances of catching the virus, and suffering its worst effects. 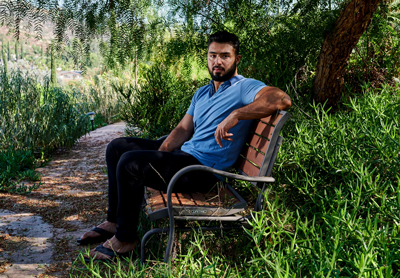 While in the hospital for vaping-related lung illness that collapsed a lung, Janan Moein was told he had a 5 percent chance of survival.Credit...John Francis Peters for The New York Times

Twenty-year-old Janan Moein vaped his first pen a year ago. By late fall, he was blowing through several THC-laced cartridges a week — more, he said, than most people can handle.

Then in early December, he found himself in the emergency room of Sharp Grossmont Hospital in San Diego with a collapsed lung and a diagnosis of vaping-related lung illness. His hospital stay plunged him into a medically induced coma, forced him onto a breathing machine and stripped nearly 50 pounds off his 6-foot-1-inch frame in just two weeks.

At one point, Mr. Moein said, his doctors gave him a 5 percent chance of survival. He resolved that the wax pen he had vaped before his hospitalization would be his last.

When he contracted a mild case of Covid-19 during a family barbecue three months ago, he knew he had quit not a moment too soon. “If I had caught Covid-19 within the week before I got really ill, I probably would have died,” he said.  Read more >>
Posted by Anthony Derek Catalano at 11:52 PM