Scott Atlas is telling Trump what he wants to hear, though Fox News—where he got on the president’s radar—is reportedly giving him fewer opportunities to speak these days. 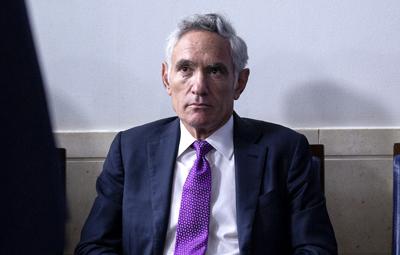 After Fox News gave Scott Atlas a platform early in the pandemic, the cable news network has lately appeared less willing to book the neuroradiologist who joined the White House last month as Donald Trump’s new pandemic adviser. Fox News producers are reportedly skittish about extending an invite to Atlas, the Daily Beast reported, a shift away from welcoming his contrarian views that some critics consider misguided and even dangerous. Senior staff involved in Fox’s “hard news” shows, the division he has been most absent from since joining the administration, say Atlas lacks credibility and the relevant medical expertise to discuss the pandemic. “Atlas has a background in radiology, not infectious diseases,” one of the sources said. “It makes no sense to have him on to discuss a contagious respiratory virus that continues to spread through parts of this country like wildfire.”  Read more >>
Posted by Anthony Derek Catalano at 6:41 AM