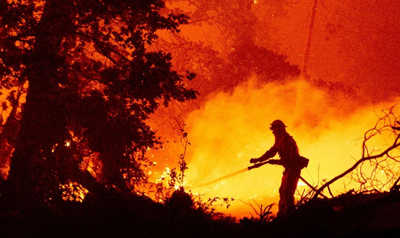 Millions of acres have burned across California, Oregon, and Washington. Josh EdelsonGetty Images

Wildfires are raging through the West Coast, scorching millions of acres and killing at least seven people so far, CNN reports. California, Oregon, and Washington have all been affected by the infernos, growing evacuation orders, and massive power outages.

The blazes, fueled by high wind and extreme temperatures, have already led to the worst California wildfire season in recorded history. At this time last year, 118,000 acres had burned in California wildfires; so far this year, it’s 2.3 million, according to Governor Gavin Newsom, who tweeted “CLIMATE. CHANGE. IS. REAL.” Firefighters are scrambling to control dozens of active fires in the state right now, with months to go until the end of the season.

Beyond California, Oregon and Washington have also experienced raging wildfires in recent days and weeks. Medford, Oregon has been especially hard-hit, with its 82,000 residents facing mandatory evacuation orders. Governor Kate Brown called the wildfires and high winds “a once-in-a-generation event” in a press conference this week.  Read make >>
Posted by Anthony Derek Catalano at 5:32 AM