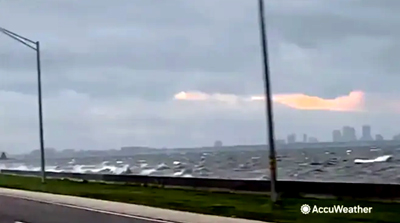 MONROE, La. — The Gulf Coast is looking down the barrel of another violent storm as newly formed Hurricane Sally churned north, threatening to bring heavy rain, howling winds and a dangerous storm surge from Louisiana to Florida.

The hurricane comes less than three weeks after Hurricane Laura carved a wide path of destruction that left more than a third of Louisiana a disaster zone.

“I know for a lot of people this storm seemed to come out of nowhere,” said Louisiana Gov. John Bel Edwards. “We need everybody to pay attention to this storm. Let’s take this one seriously.”

The National Hurricane Center said Sally is likely to bring "life-threatening storm surge, hurricane-force winds and flash flooding" along the Gulf Coast as soon as Monday.

The storm is forecast to make landfall in southeastern Louisiana early Tuesday as a Category 2 hurricane, however, the Hurricane Center said it was still too early to determine where Sally's center would move onshore.  Read more >>
Posted by Anthony Derek Catalano at 11:01 AM