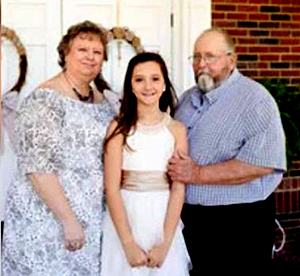 Lora and David McManus died on the same day, leaving behind their 14-year-old daughter, Sara. Bumgartner Funeral Home via WBTV

A South Carolina couple who loved to play Santa and Mrs. Claus at events in their town died Sept. 5 of complications from COVID-19, leaving behind a 14-year-old daughter.

David and Lora McManus of Pageland were married 40 years.

Their deaths were announced on Tuesday by government officials in Union County, N.C., where Lora McManus, 59, worked in the Public Works customer service office for more than 20 years. David McManus, 64, was a pulp wood logger and trucker, according to his obituary.  Read more >>
Posted by Anthony Derek Catalano at 4:53 AM