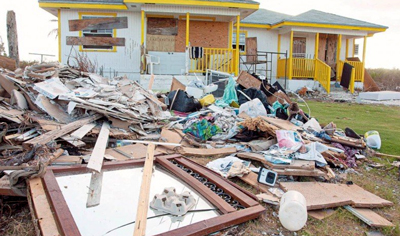 Damage to a home caused by Hurricane Dorian in Grand Bahama.

“We continue to invest in critical infrastructure to improve the lives of Grand Bahamians,” Minnis said during a press conference on Grand Bahama.

In June, the government awarded $4.5 million in contracts for “major reconstruction” of 15 schools on Grand Bahama, according to Minnis.

He also noted that $21 million was allocated for the phased redevelopment of the Rand Memorial Hospital, which was damaged when Dorian hit the island.