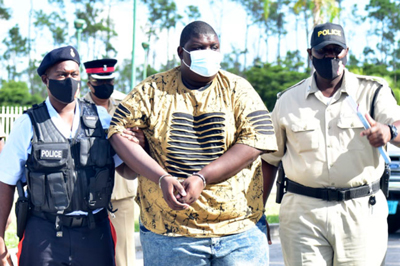 Feaster, who was arraigned on Tuesday (September 1) morning celebrated his 28th birthday on August 27, facilitated the weekend event where allegedly a large group gathered not following the COVID-19 safety protocols.

Dressed in a black and brown shirt, blue jeans, white and red tennis, Feaster and his attorney Pleasant Bridgewater heard the charges levied against him.

Magistrate Ferguson explained to Feaster that it was alleged that he on August 29 at 3:30 p.m., while at Lightbourn’s Cay, being the facilitator of a beach party failed to ensure that persons maintained physical distance between themselves and others, of no less than six feet apart while attending his event.

She questioned the defendant whether he understood the charges to which he responded: “Yes, ma’am.”

Ferguson asked the accused whether he pleaded guilty or not guilty to the charge.

He responded: “Guilty.”  Read more >>
Posted by Anthony Derek Catalano at 7:36 AM