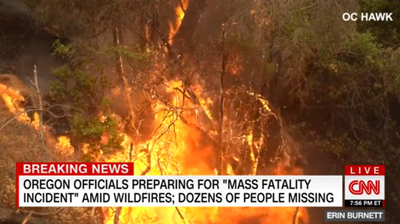 (CNN) - Suspicions of looting have driven some residents of an Oregon county to illegally stop unfamiliar drivers at gunpoint, all while much of the county is under an evacuation order as wildfires rage.

"The first thing I'd ask them to do is please stop that," Roberts said during a Sunday news conference. "It is illegal to stop somebody at gunpoint."  Read more >>
Posted by Anthony Derek Catalano at 6:19 AM