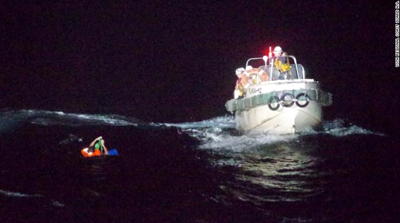 Japan's 10th Regional Coast Guard said it rescued a man who is believed to be a crew member of a missing cargo ship.

(CNN) - A second crew member has been found floating unconscious in the waters off Japan after a cargo ship with 43 people and almost 6,000 cows aboard went missing during Typhoon Maysak, according to the Japan Coast Guard.

The man was found floating face down on Friday morning near Japan's Amani Oshima island, about midway between Okinawa and Kyushu, Japan's southernmost main island. He has been taken to hospital, according to a Coast Guard statement sent to CNN.

He is only the second person to be found after the Gulf Livestock 1 transmitted a distress signal early Wednesday when it was about 185 kilometers (115 miles) west of Amami Oshima island.  Read more >>
Posted by Anthony Derek Catalano at 6:40 AM