How Greta Thunberg Brushes Off Her Haters (Trump Included) 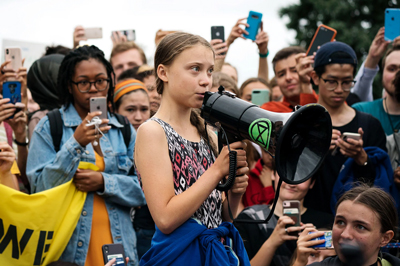 “She has a very unique way of seeing through the noise,” filmmaker Nathan Grossman said of the teenage climate activist, who takes center stage in his documentary I Am Greta. By Sarah Silbiger/Getty Images.

Greta Thunberg gives no fucks about celebrities, lying political leaders, or her haters—a fact made abundantly clear in Nathan Grossman’s documentary I Am Greta.

“She’s obsessed with action,” the Swedish filmmaker told Vanity Fair this week, ahead of the documentary’s premiere at the Venice Film Festival. “She has a very unique way of seeing through the noise.”

In one scene, after Thunberg’s climate activism has skyrocketed her to international acclaim and influence, after she’s met Pope Francis and weathered political attacks, Thunberg sits outside scrolling through her social media feeds. Wearing her hair in pigtail braids, and sitting next to her father, the 16-year-old reads aloud profane criticisms from strangers who mock her Asperger’s syndrome diagnosis and question her integrity.

Grossman—who had been following Thunberg since she was an anonymous student striking solo outside the Swedish parliament—wasn’t sure how Thunberg might react to the hatred being spewed. The filmmaker had been so keen to capture Thunberg’s perspective that he spent months hunched down, physically shrinking to capture her on camera at eye level. But even after shadowing Thunberg at length, he couldn’t have guessed how the activist would respond to the attacks.  Read more >>
Posted by Anthony Derek Catalano at 12:25 AM