Dwayne 'The Rock' Johnson: Actor and family had Covid-19 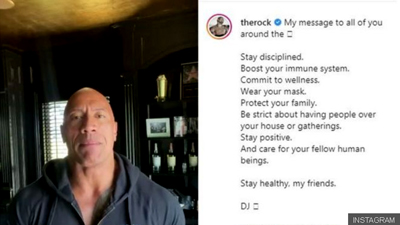 Dwayne "The Rock" Johnson says he and his family had all contracted Covid-19.

The former wrestler, who is now the world's highest-paid actor, said he, his wife and two daughters caught the virus despite being "disciplined" about health protection.

He said the positive tests were "a kick in the gut".

Now, he added: "We're on the other end of it and no longer contagious. Thank God, we're healthy."

Johnson and his family live in the US, which has recorded more than 6.1 million coronavirus cases and over 185,700 deaths linked to the disease.  Read more >>
Posted by Anthony Derek Catalano at 7:22 AM