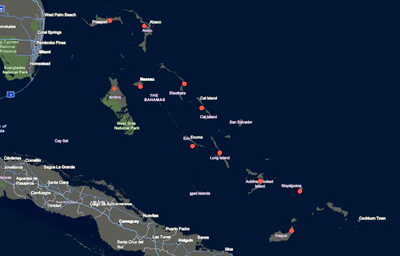 No cases on San Salvador and Ragged Island.

NASSAU, BAHAMAS — In just two months, the novel coronavirus has spread to nearly every major island of The Bahamas.

As of July 1, there were 104 cases of the virus dispersed across four islands — New Providence with 82, Grand Bahama with eight, Bimini with 13 and Cat Cay with one case.

At the time, 89 cases had recovered and no cases were hospitalized.

The Bahamas had not recorded a new infection since June 18, prompting health officials to pronounce that the curb had been flatted after nearly three months of restrictions, including a border closure, 24-hour curfew and weekend lockdowns.

July 1 marked the return of international commercial carriers to The Bahamas.

Since then, 2,276 cases have been recorded across 14 major islands with 97 cases pending locations.

San Salvador and Ragged Island remain the only major islands that have yet to record a case of the virus.  Read more >>
Posted by Anthony Derek Catalano at 6:44 AM