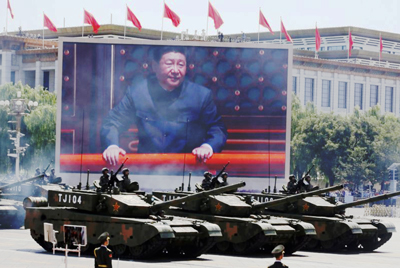 In this Thursday, Sept. 3, 2015 file photo, Chinese President Xi Jinping is displayed on a screen as Type 99A2 Chinese battle tanks take part in a parade commemorating the 70th anniversary of Japan's surrender during World War II held in front of Tiananmen Gate in Beijing. Seventy-five years after Japan's surrender in World War II, and 30 years after its economic bubble popped, the emergence of a 21st century Asian power is shaking up the status quo. As Japan did, China is butting heads with the established Western powers, which increasingly see its growing economic and military prowess as a threat. (AP Photo/Ng Han Guan, File)

BEIJING (AP) — China’s Defense Ministry on Sunday blasted a critical U.S. report on the country’s military ambitions, saying it is the U.S. instead that poses the biggest threat to the international order and world peace.

The statement follows the Sept. 2 release of the annual Defense Department report to Congress on Chinese military developments and goals that it said would have “serious implications for U.S. national interests and the security of the international rules-based order.”

Defense Ministry spokesman Col. Wu Qian called the report a “wanton distortion” of China’s aims and the relationship between the People’s Liberation Army and China’s 1.4 billion people.  Read more >>
Posted by Anthony Derek Catalano at 5:14 AM