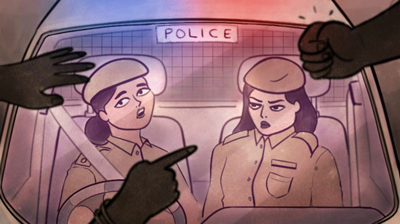 Payal and Kanchan fell in love as they trained to become policewomen. But their love has faced resistance and they have faced threats, forcing them to go to court to seek protection from their own families, reports BBC Gujarati's Bhargav Parikh.

When Payal met Kanchan, back in 2017, she had no idea she would fall in love with her fellow trainee. That year, India’s Supreme Court had ruled that gay sex was no longer a criminal offence, overturning a previous judgement that upheld a colonial-era law. But age-old customs and regressive attitudes survived, making it difficult for same-sex relationships to be accepted by larger society.

The women, both now 24, have been living together as a couple since 2018 in the western Indian state of Gujarat, and they know first hand what the discrimination feels like. Their love story was thrust into the limelight last month when they approached the high court.

“Our families are against our relationship. They are threatening us,” Payal said, adding that the two filed an application before the court, asking for police protection. The court ruled that the couple should be protected by armed guards.  Read more >>
Posted by Anthony Derek Catalano at 7:17 PM