Addicted to losing: How casino-like apps have drained people of millions 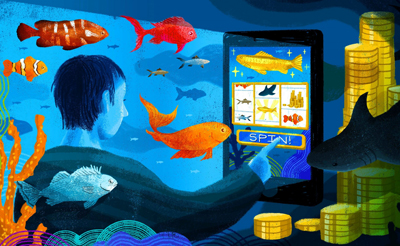 NBC News spoke to 21 people who said they were hooked on casino-style apps and had spent significant sums of money. The industry is almost entirely unregulated. Stephanie Kubo / for NBC News

Shellz, 37, a nurse from Houston, spends at least two hours a day with her husband playing a casino-style smartphone game called Jackpot Magic.

The app offers a variety of typical casino games to play, including their favorite, called Reel Rivals, a game in which players accrue points by playing a virtual slot machine. As in a real casino, players exchange money for coins to bet.

Unlike in a real casino, there is no way to win money back or earn a payout on coins.  Read more >>
Posted by Anthony Derek Catalano at 6:10 AM