We’re running out of names for 2020′s hurricanes. 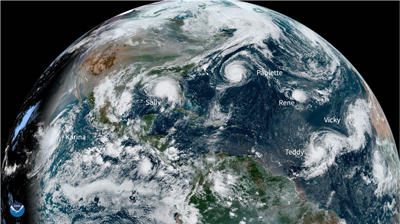 The five storm systems in the Atlantic right now, plus one in the Pacific.NOAA

The frighteningly active hurricane season is continuing to live up to meteorologists' predictions. Just a few weeks after Hurricane Laura—the strongest storm on record to make landfall in Louisiana—brought devastating storm surges and rainfall to the Gulf Coast, there are now five more named storms in the Atlantic. The last time this many storms occupied this area was 1971, when there were six storm systems that were tropical depressions or greater.

Hurricane Sally is now a Category 1 storm, but is expected to bring a “historic flood event” to coastal Alabama and the western Florida panhandle. Though the storm isn’t as ferocious in terms of wind speed, it’s moving slowly. Hurricanes that inch along can actually bring more destruction as they hover over an area, dumping immense amounts of water in one spot. The governors of Alabama, Mississippi, and Louisiana have all declared states of emergency.  Read more >>
Posted by Anthony Derek Catalano at 9:46 AM