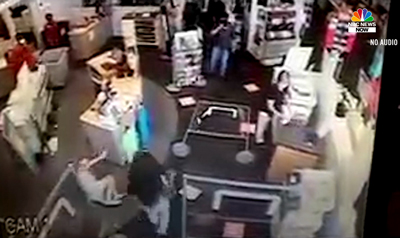 The customer, walking with a cane, asked the woman to put her mask on at the New Jersey location. The woman then threw the customer to the ground, video shows.

Police in New Jersey have arrested the woman they said was involved in a mask dispute at a Staples store last week that left a customer with a broken leg.

Thomas, a resident of Hackensack, was released on a summons pending a first court appearance on Aug. 24. She could not immediately be reached for comment.  Read more >>
Posted by Anthony Derek Catalano at 5:15 AM