Windows 10 users can now run Android apps on a PC. Here's how

You can access certain Android apps on your Windows 10 device, thanks to an update to the Your Phone app, rolling out this week. 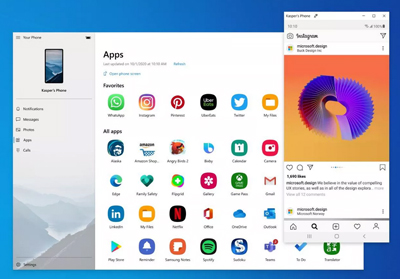 An update to the Your Phone app means certain Android phones can now run apps on Windows 10 PCs. Microsoft

Certain Android phone users can now access Android mobile apps directly from their Windows 10  PC, thanks to an update to the Your Phone app that Microsoft is rolling out to the general public this week.

The update, first announced during the Samsung Unpacked event on Aug. 5, lets you pin your favorite Android mobile apps to the Taskbar or Start menu on your Windows 10 PC for quick and easy access. The apps will open in separate windows from the Your Phone app, letting you use them basically the same way you would on your phone. With many people still working from home due to the coronavirus pandemic, the ability to access phone apps on a larger desktop or laptop screen, with a mouse, pen or touchscreen, could help with multitasking.  Read more >>
Posted by Anthony Derek Catalano at 4:16 AM