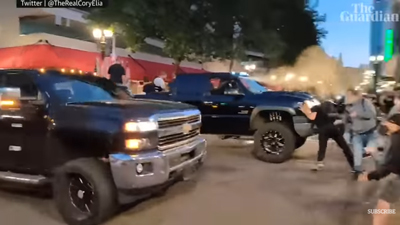 Footage shows men in pickup trucks taking part in a pro-Trump procession driving into a crowd of protesters in Portland, Oregon. They fire paintballs and pepper spray as demonstrators throw objects at the convoy. The caravan of Trump supporters drove as a group into the centre of Portland, prompting protesters to block streets and bridges in an attempt to stop them. It was the third Saturday in a row that Trump supporters have rallied in the city.  View video >>
Posted by Anthony Derek Catalano at 7:52 AM