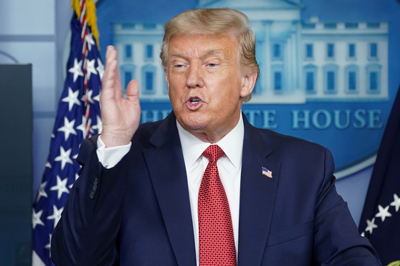 President Trump speaks during a coronavirus briefing in the White House yesterday. Reuters

WASHINGTON — China would overtake the United States as the global superpower and force Americans to learn to speak Chinese if Joe Biden wins the election, President Trump claimed on Tuesday.

“You’re going to have to learn to speak Chinese, you want to know the truth,” he said, referring to the official language of China, which is Mandarin.

The president was asked about a recent intelligence report that concluded China would prefer that Biden win the November presidential election.

“They’ll own the United State if he wins, and with me, they were having the worst year in 67 years because I tariffed the hell out of them,” Trump said.  Read more >>
Posted by Anthony Derek Catalano at 7:16 AM