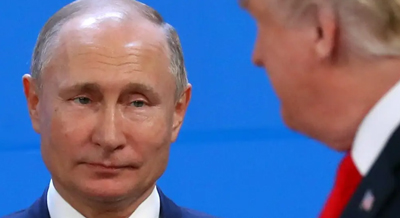 Last year, President Donald Trump's administration tried to pressure intelligence agencies to delete part of a classified report that found Russia was trying to help him win the 2020 election, according to an investigation by The New York Times Magazine.

The report, known as a National Intelligence Estimate, was compiled by the Office of the Director of National Intelligence (ODNI) in July 2019 and made several "key judgments" about matters of national security. "Key Judgement 2" in the report concluded that Russia aimed to interfere in the 2020 election to help Trump, unnamed national security sources told Times reporter Robert Draper.

Trump was reportedly unhappy with that finding. He has repeatedly denied the assertion that Russia tried to help his campaign in 2016 despite reports from the FBI, CIA, NSA, Justice Department, and Republican-led Senate Intelligence Committee that supported that conclusion. Russian President Vladimir Putin has similarly denied interfering in the 2016 election, but has also said he wanted Trump to win.  Read more >>
Posted by Anthony Derek Catalano at 8:22 AM