The ship that leaked oil into pristine Mauritian waters could break in two. That would be an environmental catastrophe 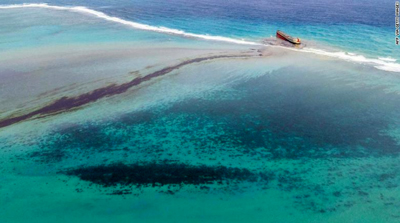 (CNN) - A stricken ship off the coast of Mauritius which has already leaked about 1,000 metric tons of oil into a pristine Indian Ocean lagoon could be about to break in two, experts fear -- spelling disaster for the ecologically rich area.

The Japanese-owned ship, MV Wakashio, ran aground at Pointe d'Esny in late July. A massive clean-up operation has been launched from the shore since oil began leaking on Thursday, with thousands of local volunteers heading to the eastern side of the island nation to help.

However some on the ground said Tuesday that new cracks had appeared -- and if the ship broke up, thousands more tons of fuel would be released into the lagoon.  Read more >>
Posted by Anthony Derek Catalano at 8:03 AM