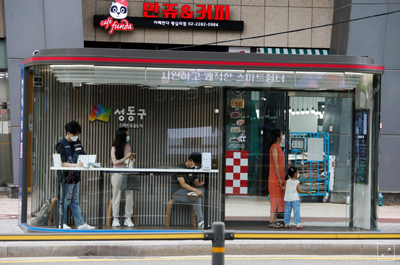 People wait for the bus inside a glass covered stop in which a thermal imaging camera, UV sterilizer, air conditioner, CCTV and digital signage are set, to avoid the spread of COVID-19 in Seoul, South Korea, August 14, 2020. REUTERS/Heo Ran

SEOUL (Reuters) - South Korea warned on Monday of a looming novel coronavirus crisis as new outbreaks flared, including one linked to a church where more than 300 members of the congregation have been infected but hundreds more are reluctant to get tested.

The outbreak linked to the Sarang Jeil Church in Seoul is the country’s biggest in nearly six months and led to a tightening of social distancing rules on Sunday.

The Korea Centers for Disease Control and Prevention (KCDC) reported 197 new cases as of midnight on Saturday, mostly in the Seoul metropolitan area, marking the fourth day of a three-digit tally.

South Korea has been one of the world’s coronavirus mitigation success stories but it has nevertheless battled persistent spikes in infections. The latest cases brought its total infections to 15,515 including 305 deaths.

“We’re seeing the current situation as an initial stage of a large-scale transmission,” KCDC director Jeong Eun-kyeong told a briefing.

“We’re facing a crisis where if the current spread isn’t controlled, it would bring an exponential rise in cases, which could in turn lead to the collapse of our medical system and enormous economic damage.”  Read more >>
Posted by Anthony Derek Catalano at 7:40 AM