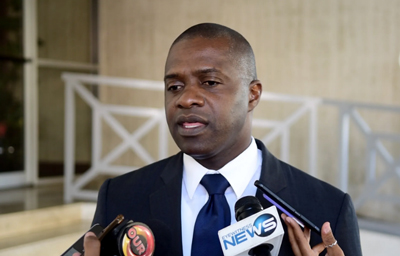 Johnson declined further comment when pressed for more details ahead of a Cabinet meeting.

Director of Immigration Clarence Russell yesterday confirmed some 29 immigration officers have have had to quarantine during the pandemic.

Russell declined comment on how many officers have tested positive for the virus due to “medical confidentiality”.

Yesterday, Deron Brooks, vice president of The Bahamas Customs and Immigration Allied Workers Union(BCIAWU), reiterated concerns over the safety of immigration and customs workers on the frontlines.

Brooks said customs and immigration officers are faced with a certain level of risk and hazard during detention, arrest, and interdiction exercises.

“It’s a certain level of occupational hazard, it comes with the territory,” he said.  Read more >>
Posted by Anthony Derek Catalano at 5:56 AM