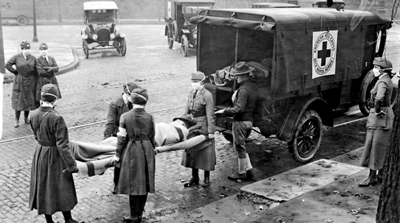 The coronavirus is at least as deadly as the 1918 flu pandemic and the death toll could even be worse if world leaders and public health officials fail to adequately contain it, researchers warned in a study published Thursday in the medical journal JAMA Network Open.

“What we want people to know is that this has 1918 potential,” lead author Dr. Jeremy Faust said in an interview, adding that the outbreak in New York was at least 70% as bad as the one in 1918 when doctors didn’t have ventilators or other advances to help save lives like they do today. “This is not something to just shrug off like the flu.”

Researchers compared excess deaths in New York City during the peak of the 1918 pandemic with those during the first few months of the Covid-19 outbreak. They used public data from the Centers for Disease Control and Prevention, the New York City Department of Health and Mental Hygiene, and the U.S. Census Bureau to conduct their analysis.

The increase in deaths during the 1918 flu pandemic was higher overall, but comparable to that observed in the first two months of the coronavirus outbreak in New York City, the researchers found. But when taking into account improvements in hygiene, modern medicine and public health, the increase during the early coronavirus outbreak was “substantially greater” than during the peak of the 1918 pandemic, the researchers wrote.

“If insufficiently treated, SARS-CoV-2 infection may have comparable or greater mortality than 1918 H1N1 influenza virus infection,” Faust wrote in the paper. He’s a physician at Brigham and Women’s Hospital and an instructor at Harvard Medical School.

Public health officials and infectious disease experts have often compared Covid-19 to the 1918 flu, which is estimated to have killed 50 million people worldwide from 1918 through 1919, including 675,000 Americans, according to the CDC. More than 20 million people died in World War I, by comparison.  Read more >>
Posted by Anthony Derek Catalano at 6:26 AM