SARS-CoV-2 droplets travel further and last longer than thought, and even more in humid air 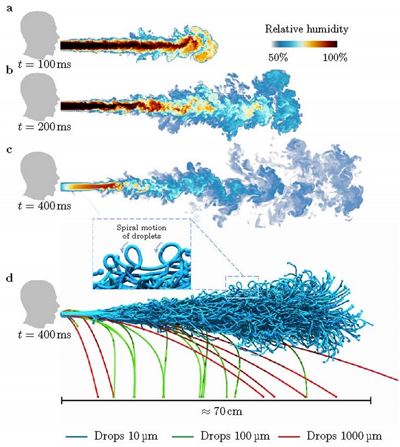 Visualisations of droplets in a heavy cough for RH = 50%: a-d, Snapshots of the droplet-laden cough simulation. At time t = 100 ms, the cough contains hot air with high moisture content. The hot moist air propagates (t ~ 200 ms) and dissipates (t ~ 400 ms) into the ambient surroundings. At t ~ 400 ms, we show larger droplets falling out from the puff whereas smaller droplets remain protected and are carried along by the puff.

The current rules of social distancing originated with a 1919 paper dealing with the Spanish flu of that time. This, in turn, was based on a theory of droplet transmission of viruses developed by William F. Wells in connection with the spread of tuberculosis. He thought that the wide range of particles produced by a cough or sneeze in a tuberculosis patient would determine the behavior of the droplets. Small droplets would rapidly evaporate and leave behind less infectious dried aerosol particles with lower transmission risk. Larger droplets would be like bullets. In the current study, droplets measuring over 5-10 micrometers are called respiratory droplets and can cause host-to-host spread. Small droplets, or respiratory droplets, transfer the virus through aerosols.

Despite the age of this principle, the evidence is building that it is faulty. Not only has viral spread continued to take place, especially with superspreaders, but the droplets are known to last longer and spread farther than a few seconds and two meters – namely, up to 8 meters and for up to 10 minutes, respectively. This is because droplets are typically expelled as a cloud, within warm and humid air, which delays their drying out and prolongs their infectious period. In fact, droplet lifetime is dependent on the mixing process within this turbulent air, while the earlier drying behavior is that of a single droplet.  Read more >>
Posted by Anthony Derek Catalano at 8:04 AM