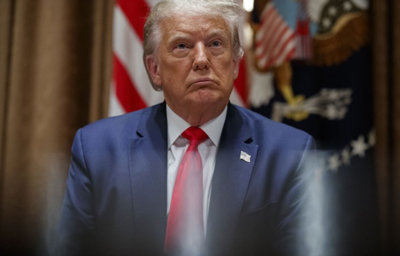 President Donald Trump listens during a meeting with U.S. tech workers, before signing an Executive Order on hiring American workers, in the Cabinet Room of the White House, Monday, Aug. 3, 2020, in Washington. A Manhattan prosecutor trying to get President Trump’s tax returns told a judge Monday that he was justified in demanding them, citing public reports of “extensive and protracted criminal conduct at the Trump Organization.” Trump’s lawyers last month said the grand jury subpoena for the tax returns was issued in bad faith and amounted to harassment of the president. (AP Photo/Alex Brandon)

NEW YORK (AP) — A New York City prosecutor fighting to get President Donald Trump’s tax returns told a judge Monday he was justified in demanding them because of public reports of “extensive and protracted criminal conduct at the Trump Organization.”

Manhattan District Attorney Cyrus R. Vance, Jr. is seeking eight years of the Republican president’s personal and corporate tax records, but has disclosed little about what prompted him to request the records, other than part of the investigation related to payoffs to two women to keep them quiet about alleged affairs with Trump.

In a court filing Monday, attorneys for Vance, a Democrat, said the president wasn’t entitled to know the exact nature of the grand jury probe, which they called a “complex financial investigation.”

They noted, though, that at the time the subpoena for the tax filings was issued to Trump’s accountants, “there were public allegations of possible criminal activity” at the president’s company “dating back over a decade.”

They cited several newspaper articles, including one in which the Washington Post examined allegations that Trump had a practice of sending financial statements to potential business partners and banks that inflated the worth of his projects by claiming they were bigger or more potentially lucrative than they actually were.  Read more >>
Posted by Anthony Derek Catalano at 6:27 AM