Portland mayor excoriates Trump: 'It's you who have created the hate' 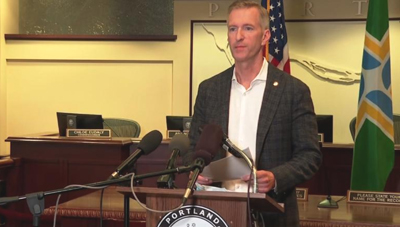 Washington (CNN) - The Democratic mayor of Portland, Oregon, said Sunday it is President Donald Trump who "created the hate" in an unyielding attack on the White House following a shooting at a protest that left one person dead.

Speaking at a news conference, Mayor Ted Wheeler asked, "Do you seriously wonder, Mr. President, why this is the first time in decades that America has seen this level of violence?"

"It's you who have created the hate and the division. It's you who have not found a way to say the names of Black people killed by police officers even as people in law enforcement have. And it's you who claimed that White supremacists are good people," he continued. "Your campaign of fear is as anti-democratic as anything you've done to create hate and vitriol in our beautiful country."

His forceful comments come one day after a person was shot and killed in downtown Portland after an evening of violent clashes between Trump supporters and protesters denouncing police brutality.  Read more >>
Posted by Anthony Derek Catalano at 7:44 AM