Police get body and dash cameras 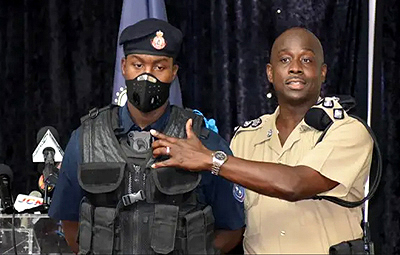 The integration of 400 dashboard and body cameras will lead to greater transparency and accountability on the force, Commissioner of Police Paul Rolle said yesterday.

The implementation of the cameras came days after a man was killed by police in Pinewood Gardens.

“The purpose of the camera is, one, to assist us and the policymakers and decision-makers with accurate accounts,” Rolle said during a ceremony at police headquarters.

“…We always have questions surrounding activities, and so this is going to give us, hopefully, a third eye. And it should also help to mitigate against some of the complaints that are levied against the police as well.

“And also to help keep police officers accountable. We are all about accountability and I would like to know that our officers are accountable for their actions while out on patrol.”

Rolle said that as of yesterday, all officers on patrol on New Providence are expected to wear a camera while on duty.

According to Chief Superintendent Damian Robinson, there are enough cameras for the typical number of patrol cars out on a given day.

He said officers are not allowed to turn off their cameras, which record images nonstop. However, they must activate audio by pressing a button on the devices.  Read more >>
Posted by Anthony Derek Catalano at 7:59 AM