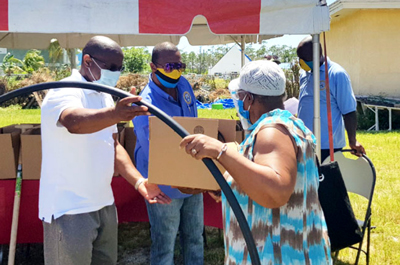 On Wednesday (August 26) afternoon, 100 constituents in Marco City received their starter kits for the backyard farming project, which include seeds, soil, fertilizer, an irrigation hose, a shovel and other items.

The government is committed to ensuring food security that is to reduce the $600 million it has been spending on food as well as fresh flowers, and backyard farming is one of several initiatives the minister said.

“The second is community gardening, which we are developing throughout Grand Bahama. The third would be commercial farming, and, we are working with the Grand Bahama Port Authority (GBPA), IICA (Inter-American Institute for Cooperation on Agriculture), as well as CARDI (Caribbean Agricultural Research and Development Institute). The latter are two regional organizations to help develop commercial farmers.

“So today, all of our constituencies are involved in the backyard farming and Marco City is distributing free kits to residents,” he added.  Read more >>
Posted by Anthony Derek Catalano at 7:55 AM