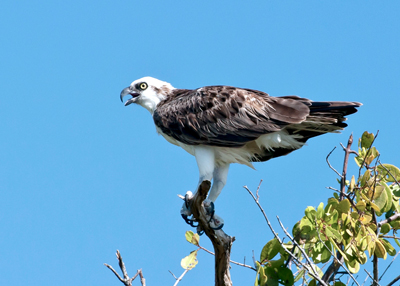 I have featured bird comparatives from time to time, not least because scope for confusion meant that I needed to investigate for my own peace of mind. These included the tyrant flycatchers; a number of superficially similar warbler species (mostly with yellow bits); varid vireos; all those heron-y / egret-y types and their disconcerting morphs (hello, white reddish egret).

And so to the magnificent osprey Pandion haliaetus. This time, the comparison is between two subspecies, broadly the North American P. h. carolinensis and the Caribbean P.h. ridgwayi. There is some overlap in Florida, and some evidence of interbreeding. In the northern Bahamas in particular there is also an overlap, so an osprey seen on Abaco could be either variety. You’ll probably be too excited watching it to care much which type it is, but this article will help you if you do…  Read more >>
Posted by Anthony Derek Catalano at 8:15 AM