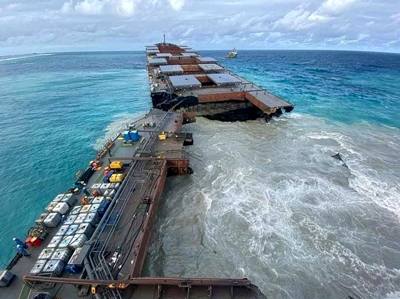 In pictures issued today, the hull of the MW Wakashio boat can be seen completely split in two. It's unsure what date the images were taken.

Pictures of the boat which ran aground off Mauritius in late July show the cargo ship completely torn in two parts, days after Japanese rescue teams managed to pump the remaining oil off the vehicle to prevent another massive oil spill into the pristine waters.

Mauritius Prime Minister Pravind Jugnauth confirmed Tuesday that all the fuel had been pumped from the reservoirs of the Japanese-owned MW Wakashio and added that about 100 tonnes remained elsewhere on board the vessel.

In pictures issued today, the hull of the boat can be seen completely split in two. It's unsure what date the images were taken.

The Mauritian government has been criticised for doing too little in the week after the ship crashed into the reef. According to SBSNews, the owner of the ship - the Japanese Nagashiki shipping company - took three weeks to attend the scene.

In response to the company's delayed arrival, Greenpeace wrote: 'Many unanswered questions remain. Why was your vessel sailing so dangerously close to the reef? Why have you done so little since the ship ran aground? What will you do to reduce the damage to the environment, and the pain and suffering of those whose livelihoods depend on it?'

The government made a statement last night saying that they were seeking compensation from the ship's owner for clean-up costs, losses and damages, and for anyone whose livelihood was affected by the spill.

It stressed, however, the Mauritian government will not be accepting responsibility.  Read more >>
Posted by Anthony Derek Catalano at 7:32 AM